We talk about the community in football and building a brand around the new wave of thinking happening in the game. WMF are always happy to promote other companies who are like minded and have a similar mission to ourselves; remember we are all the “WE” in We Make Footballers!

Therefore, when Sean Conlon (WMF CEO) read about the work his friend Godfrey Torto was doing to help raise money for Grenfell Tower victims and their families, we knew we had to share the story!

Sean has known Godfrey for the past 8 years and they have done a lot of work together helping players get contracts at professional clubs. Godfrey, a registered intermediary, has helped a number of players Sean has recommended to him.

Read this article on Godfrey and how he is using football to improve the lives of his players. 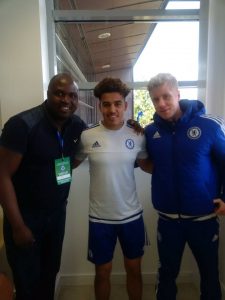 ​This photo was taken when Sean helped Yasin Ben El-Mhanni get a trial at Chelsea. 3 months later he got his professional contract at Newcastle.

The FA have been working hard for the past decade to change the fate of our nation. We (everyone in England) are all waiting to see if we are the next Germany or Belgium, as we are constantly told there has been an overhaul of our coaching structure and things will change.

This summer we started to see some real change at senior youth level…we started winning!

If this babies reaction to England’s success wasn’t your reaction, it was either because:

If you chose 1 then hats off to you – I would love to speak to you about buying a franchise, as you must really be in touch with the game! If you chose 2, I’m not sure how you found your way to this website ????, but if you chose 3 then I would suggest reading on.

Many people believe England have alway been successful at youth level but this is actually untrue. If you look at the results on online of U23, U21 and U20 level football, England has had disastrous campaigns for the past decade.

However, it takes 10 years for a new youth football regime to take effect. New policies are built at grassroots U8/U9 level and you won’t see the change until U18/U19.

I am forever the optimist, but I agree with “The Whitehouse Address” writer Matt Whitehouse: Something Special is Happening with English Youth Football