In 2015 we established We Make Footballers as a franchise and, with 4 new Franchisees joining the network in 2017, we now have 7 franchises in operation. We are delighted with the level of growth we have seen in such a short period of time.

We are most pleased that our franchisees are enjoying their work and succeeding in building their football empires in line with the plans originally agreed with them.

We have recruited more full-time staff to ensure our Head Office can continue to provide enough hands-on support for our Franchisees to help them achieve their goals. This support mainly covers: business operations, marketing and the product/service (football coaching).

The success of the Premier League and the rapid rate of girls joining the game, is creating a rise in the demand for football coaching we have never seen before. It is a very exciting time for WMF.

We Make Footballers are just in the process of formalising an exclusive partnership with a top London Woman’s Super League 1 team, which will help us reach our target of 300 female players subscribed to our classes in 2018.

We are also responsible for organising the International London Cup. This is a unique competition mixing the best grassroots teams in the UK with the best academies in Europe. Teams we have confirmed so far include PSG, Ajax, Man City and AC Milan. 2018 is going to be an incredible year.

In 2018 we will take on 9 new Franchisees that we believe can succeed with our business model – one of which will be outside of the UK.

2017 has been a great year for us, but we will never stand still and will keep pushing to achieve our targets for 2018.

Get in touch if you would like to put yourself forward to be involved with We Make Footballers.

We are all responsible for the footballers we produce.

Since the creation of WMF, our Franchisees have had the opportunity, and the pleasure, to coach the children of famous pro players, such as Jamie Redknapp, Florent Malouda, Dennis Wise and Didier Drogba. So it does not come as a surprise to learn that a footballer, currently playing for Arsenal, has enrolled their child to train with us at one of our franchises.

We’re very appreciative that parents/guardians, of all types of backgrounds, trust WMF to deliver excellent coaching for their children. Regardless of a child’s background or family name, we take equality and diversity very seriously, which means all children who train with us are treated and trained with no partiality. WMF Franchises offer all pupils the same opportunity to play within Grassroots teams or be scouted for professional teams, with no influence but the talent and skill Academy directors and coaches see from the players themselves.

For more information on how we ensure our Franchises implement Equality & Diversity, read our policy on our customer website. 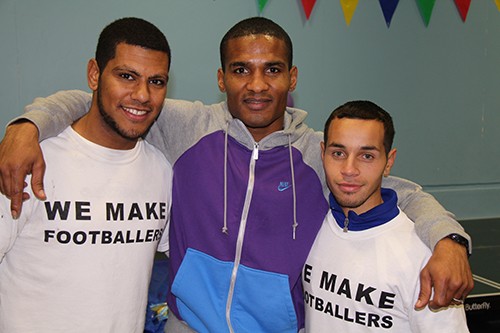 We Make Footballers are growing quickly, we coach 2000 children across our football classes in 14 different venues. With this many children, we always ensure that we have the most talented, qualified and passionate coaches at every class.
We Make Footballers Finchley has been the newest addition to our venues and to launch this location we put on a Talent ID event in which scouts from professional academies and local grassroots managers were invited to look for talented players. Our Talent ID days are packed with football and we aim to make the experience as memorable as possible for each child.
On this occasion, we were lucky to have Guest Coach Lucia Leon in attendance, a Professional Tottenham Ladies and Spanish International player! Lucia is a 19-year-old Spurs defender and has played in WSL 2 (Women’s Super League). Lucia did a fantastic job on the day sharing her game experience and coaching 130 children throughout the day.

We believe it is important to give children exposure to professional athletes at We Make Footballers as they provide excellent first-hand experience and are a great inspiration for young players. By having high calibre guest coaches at our sessions, children are able to see that these players are real and they are able to connect through their enthusiasm for the sport.
We Make Footballers firmly support Women’s football. We work extremely hard to encourage girls to join our classes by creating an open and safe environment that enables every player to develop. With our 50/50 male and female work-force company target, we believe that by having a greater number female coaches, younger female players will be inspired by these role models.
We are very proud to have hosted Lucia Leon during our Talent ID event as she is a fantastic role model and we will be looking forward to working with her again in the future! Thanks Coach Lucia! 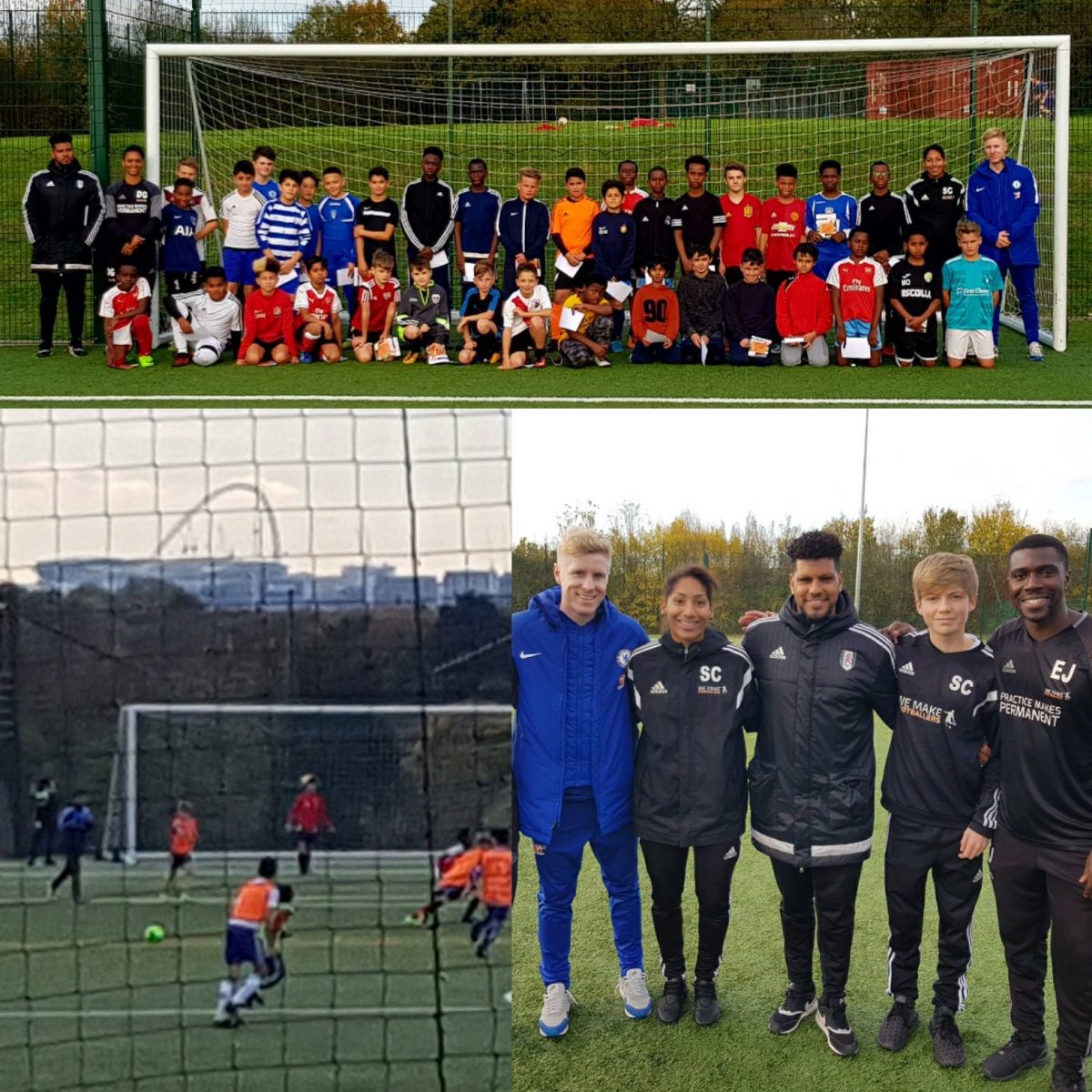 “We’re playing a team who will be young and quick but you can’t put a price on experience, which we have in abundance at WMF”
– Simon Karrie, Coulsdon & Carshalton Academy Director.

We Make Footballers are constantly challenging ourselves to develop as the leaders of football coaching for children of all abilities ages 4-12 and we do this by ensuring we bring our A GAME to everything that we do.

For this reason, we have put together the WMF dream squad and challenged AG Academy to a showdown match on the 17th of December as part of our Winter Series of Tournaments.

We Make Footballers deliver the best football coaching by ensuring we have the best and most experienced coaches, with all of our coaching team having played high levels of football, some in academies, semi-pro clubs and with some even reaching professional (see our success stories).

As momentum builds, our coaches have been preparing for the big game and they are now counting down the days in anticipation.

Founder and CEO of We Make Footballers, Sean Conlon has been working closely with his squad of players on strategy in preparation. He also is looking forward to enjoying the game with a coaching team he has worked hard to build over the years:

“I’m really looking forward to playing this game. I haven’t played 11 aside for a long time but have been training hard privately in preparation for the game. So many of my friends are going to be playing for our We Make Footballers team so the banter levels will definitely be high. My favourite coach who got me into coaching will be the ref so it will fantastic for him to see me play, my mum and dad will also be watching the game. I just hope the left winger isn’t too fast and skilful!”

“I’ll be giving those youngsters at AG Academy a lesson on finishing. I’ll make sure I apologise to their keeper in advance. My score prediction: WMF 5 – 2 AG Academy“.

Coach Esmond is one of our most popular coaches with his appearances across the We Make Footballers Academies, he also played at semi-pro level and has just come back from an injury; we can’t wait to welcome Esmond back onto the pitch!

“The game against AG Academy will be a good test for both teams. They will definitely have to edge in fitness over us but we definitely have the experience to win this game. We have a very strong lineup and having played with the likes of Marcelo, Andrew, Sean and Jojo for years we know how each other play so that will definitely give us an advantage”.

True to the WMF Coaching and Playing Style, he gave us an insight on the secret WMF formation “It suits our team well, we have a solid base allowing our more creative players to do what they do best”.

We have looked to important members of We Make Footballers for this game and invited Coulsdon and Carshalton franchise owner and Academy Director Simon Karrie to play: “I am looking forward to the game as it’s been awhile since I’ve had that match day buzz”. Simon has been doing fantastic work in South London coaching 150 children a week and building a brilliant squad of coaches.
We have also invited Chiswick & Southall franchise owner and Academy Director Marcelo Graca. Marcelo has been with We Make Footballers since 2010, he worked his way up the ranks and now coaches over 220 children a week! He has worked closely with Sean on the strategic formation and set plays for the match

“We’re excited as coaches to experiment with the new ‘in style’ formation which is 3-4-3! We feel with the personnel we have in our squad it will get the best out of everyone individually and as a collective”

Feel free to come down to watch the WMF Team and support your favourite Coach! The game will be played this Sunday 17th December at 2pm at Whitton Sports Centre, on the 3G Astro.

The match is about team building, sportsmanship and fair play! We hope to bring the best out of We Make Footballers by challenging highly respectable teams in the football community but also have fun and make the most of our favourite sport!