Selecting the right youth football academy for your child can seem like a daunting task. There is so much choice out there and it is a decision that most parents feel under a lot of pressure to get correct.

That is understandable. The right youth football coaching academy will not only help a player improve and maximise their abilities, but also provide a positive experience of the sport. If a child has fun and enjoys their time playing football, then they are more likely to develop a lifelong love of the game.

This is particularly important for younger children taking their initial steps in football. First impressions are everything; a child’s first impression of playing football will have a huge impact on shaping their opinion of the sport and whether they wish to continue playing it as they get older.

Conversely, a bad experience at a youth football training academy can be enough to put a child off football for life. Nobody wants that to be the case – especially if the child has always harboured dreams of playing football, only to be forced into a change of opinion through poor coaching or a bad environment.

The good news is that there are several aspects of a youth football training academy you can look at to help you choose the right one for your child. The following will help you get started.

The first place to start is the quality of coaches. Parents want their children to be taught how to play football by people who know what they are doing, who have themselves been taught best practices on how to coach.

In England, football coaches undertake a series of qualifications via the Football Association. Completing the Introduction to Coaching Football course gives a coach the basic skills needed.

From there they can progress through their UEFA C, UEFA B and UEFA A badges right up to the UEFA Pro Licence, which professional football managers must hold to work in the Premier League.

A good youth football coaching academy will only employ FA Qualified Coaches to ensure that sessions are delivered in line with best practices. At We Make Footballers, we go further than just FA coaching badges by putting coaches through additional in-house We Make Footballers qualifications.

These qualifications add to the knowledge base of our coaches, helping them to develop players based on the We Make Footballers philosophy.

The philosophy of a youth football training academy

Different youth football training academies will have different ideas about the way they think the game should be played. This is called their footballing philosophy and it can be an important consideration when it comes to choosing where your child plays their youth football.

You should attempt to find a football academy that fit with how you and your child want to play and the sort of player you wish them to become. Once upon a time, English football valued size above all else when it came to identifying youth talent.

The biggest children were those who academies focussed on; those with the strength to outmuscle opponents, the height to win headers and who could kick the ball the furthest. Smaller, technically gifted players were often overlooked.

That has changed over the past 10 to 15 years. English football and the FA looked at the success of Spain and then Germany, playing brilliant-to-watch possession football delivered by players like Xavi, Andreas Iniesta, Phillip Lahm and Mesut Ozil and decided that was the way to play.

Listed on the We Make Footballers website is our philosophy. We believe in a quick, clever and attractive style of football which breaks the pitch into thirds. Players are taught the value of keeping possession, fluidity of moment and moving the ball positively. We encourage children to find space and use it to take the most open route to the goal via disguised, quick and unpredictable play.

When selecting a youth football coaching academy, find out what their philosophy is. If they do not have one, that can be a warning sign that they may lack the focus to deliver the training needed to help your child fulfil their potential.

The ethos of a youth football training academy

The philosophy of a youth football training academy informs you what sort of player they will aim to fashion your child into. The ethos tells you a little bit more about how they will do it and the environment they provide for players.

As noted in the introduction, the environment is arguably the biggest factor in whether a child enjoys their football coaching and sticks with it or wants to give up the sport. It is therefore a massive consideration when choosing a youth football academy.

Some academies believe that their purpose above all else is to produce winners. They want their players to win every match and progress into professional clubs. That can create a fear of failure and heap undue pressure onto young players, taking away a lot of the fun and joy football is meant to provide for children. And when the fun goes, unhappiness quickly follows.

The ethos of We Make Footballers is to provide football training in a fun and safe environment for children of all abilities. Whether they are the next Lionel Messi or just want to come along, make friends and kick a ball around for an hour a week, We Make Footballers overriding aim is to make football enjoyable for everyone. Once you start with that, anything is possible.

Fun and safe. You should only consider enrolling your child in a football training academy that gives you the confidence that they will keep your child safe.

All the normal aspects of safeguarding apply here. Consent forms, DBS checks and first aid training would be top of that list. In a physical contact sport such as football, the first aid element is particularly important.

Injuries and accidents will happen from time to time. Those delivering football coaching sessions to your child need to know how to deal with them. The basics of this are covered by the FA’s coaching qualifications, whilst the best youth football academies will supplement the knowledge of their coaches by providing additional training.

Needless to see, all We Make Footballers coaches are DBS checked and first aid trained. We take safety as seriously as anything else because without safety children cannot have fun playing football.

Approachability and interaction with parents

Every parent who wants the best for their child will take a keen interest in what is happening at their weekly football training sessions. Parents may have questions and concerns. They might want to know about the progress their child is making, areas to improve and if there is anything that can be done away from the football academy which could help development.

Some coaches will balk at this sort of interaction. They view parents as interfering and less knowledgeable than the coach, making themselves unapproachable in the process. If a coach makes it well known that they do not want to talk to parents, then that is often a bad sign.

Youth football is a two-way street. The best youth football academies have parents on board, viewing them as aiding the process rather than hindering it. Feedback to parents reassures them of the high-quality football training a child is receiving, informing them where a player is at and where they are headed next in their development.

Coaches who take the time to include parents or share news and success stories via social media are going above and beyond the hour-a-week session, they have with their players. That shows their passion and dedication to the role.

You can tell a lot about a football coach by how organised they are. Nobody wants to turn up to youth football training where the coach is late or is still setting up when the session is meant to be getting underway.

The best youth football academies will have every session meticulously planned. Not a minute will be wasted as the coaches make the most of working with their players, delivering an hour of fun with no standing around.

Another reason to choose a football academy with an excellent organisation is that coaches become role models to the children they work with. Having a coach who is consistently late, does not set a good example about the values of punctuality.

Some parents will want cold, hard evidence of the quality of a youth football training academy via success stories. But what exactly is a success story at the youth level?

Only a tiny, tiny percentage of children who play football in England ever go on to make it as professionals. Any youth football coaching academy that says every player they take on will be placed in a professional setup is making a very outlandish claim.

When it comes to youth football and managing expectations, academies should deal with realism. For We Make Footballers, it is our aim that every child we work with for at least four years between the ages of 4 and 12 goes to senior school having been developed into a football player good enough to get into the school A-Team.

From that basis, bigger achievements can grow. We Make Footballers alumni have gone on to play in the youth setups at professional clubs including Chelsea, Brentford, Norwich City, Watford, Fulham and Arsenal. Some have even played for England.

Success stories are all relative to the starting point of the child. By focussing on getting every player into the school A-Team, We Make Footballers show a commitment to every child who joins their academies rather than just those with the potential to make it to professional clubs. And that is the real success story.

The reputation of a football coaching academy can tell you a lot about whether they are right for a child. How long have they been around? If they are still going from strength to strength a decade after opening and provide weekly training sessions all around the country, then chances are they are doing something right and will have the reputation to back that up.

Online reviews now cover every area of life, from restaurants to hotels to tourist attractions and yes, even football coaching academies. Google allows customers to review anything they want whilst companies like Trustpilot offer star ratings. As the name suggests, these independent reviews can be trusted.

Other parents can also be a great help in selecting the right youth football academy for your child. Ask questions about where their children attend football training, whether they enjoy it, the positives and negatives and whether they would recommend them.

Sometimes, word of mouth and a positive impression left on fellow parents which they are then willing to articulate can be the decisive factor in choosing a youth football academy. Which is another example of why the approachability and interaction coaches have with parents can be so important.

We Make Footballers provide youth football training in a fun and safe environment for children aged between 4 and 12 across England. To find out more from one of our FA-qualified coaches, find your nearest academy and book a free introductory session for your child, please visit the We Make Footballers website. 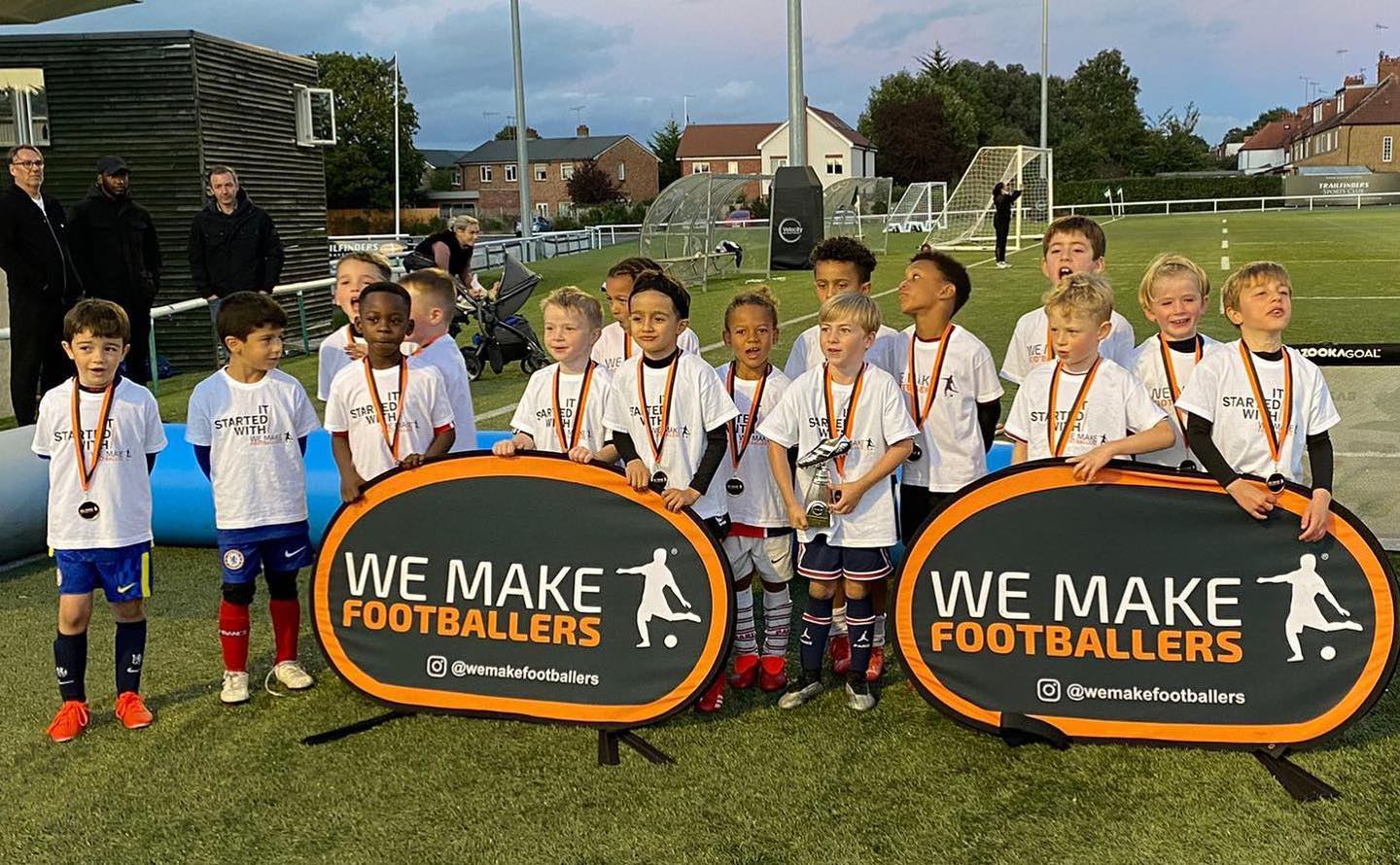