England DNA. It’s one of those football buzzwords that have been bandied around in the press over the past five years, sometimes in admiration and other times in mockery. Most football fans have heard of it, but how many actually know what it is?

How the FA came up with the England DNA

The new England DNA was launched in 2014 by the FA’s then-Technical Director Dan Ashworth. Ashworth had been headhunted from West Bromwich Albion in 2012 with the remit of overhauling the England setup, turning the Three Lions from a team that won Time Magazine’s Most Disappointing in the World Award in 2012 into one that could lift a first World Cup since 1966.

Ashworth studied the success of the German model which had been overhauled after their embarrassing exit at the group stages of Euro 2000 to produce of the best teams in the world at that point in time.

He looked at how a country the size of Belgium had managed to churn out a golden generation of some of the finest players in the world. He considered how France’s 1998 World Cup success had been knitted together on the fields of their national training centre at Clairefontaine.

The one recurring theme that all these success stories contained was football DNA. There was a clear set of guidelines and best practice laid out to produce elite footballers who would then be exposed to high-level competition from a young age, ensuring that they had enough quality and experience for when they hit their peaks in their mid-to-late 20s.

Ashworth and the FA took all that on board with the result being the England DNA Blueprint for Elite Player Development. 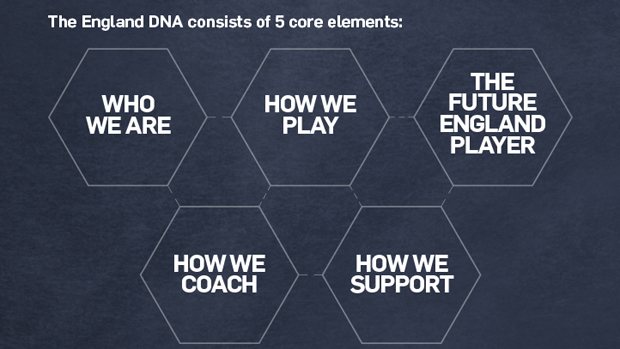 The England Football DNA is made up of five core elements. Element one is Who We Are, which focussed on what the FA consider to be the culture and values of English football. The idea is that every player who enters the England system from age-group levels through to Under 21s through to the senior squad should be consistent in the way they behave. Who We Are encourages pride in representing your country, integrity in doing so to the highest standards possible, excellence in never striving to be anything but the best and collaboration – the idea of every England side pulling in the same direction.

The FA Consider the How We Play element of the England Football DNA to be the most important. This lays down a consistent, possession based playing style that every England team must adhere to, the thought process being that if the Under 16s play the same way as the senior squad, then it smooths a player’s journey through the age groups as they will always know what is expected of them.

Element three is The Future England Player. This looks at that pathway to the senior setup. The FA noted that whilst England gave their most talented young players a summer off if there was an Under 21 tournament taking place, most other countries sent their best possible squads to gain tournament experience.

For Germany, the likes of Manuel Neuer, Mats Hummels, Sami Khedira, and Mesut Özil all starred as Die Mannscaft’s Under 21s won the European Championships in 2009. A year later, they reach the semi-finals of the World Cup in South Africa. Four years after that, they were the backbone of the side that lifted the trophy in Brazil.

As a result, young English players can now see a route from the age groups sides into the senior set up. The likes of Jadon Sancho, Mason Mount and Tammy Abraham move through the system seamlessly, gaining experience which stands them in good stead for when the time arrives for them to become regulars in the senior squad.

Element four is How We Coach. It’s a well-known fact that England lags behind the likes of Spain and France when it comes to the number of qualified coaches each country is. More coaches trained to a higher standard leads to more capable players being developed at grassroots level.

How We Coach aims to raise the bar as well as ingraining game strategies, training strategies and a coaching method that delivers the rest of the England DNA through a consistent framework.

Finally, there is How We Support. This looks at everything away from what happens for 90 minutes on the pitch. England Football DNA wants the Three Lions to lead the way in sports science, medicine, analytics and the psychological side of the game to create players who have the full package and are as strong physically and mentally as they are talented. 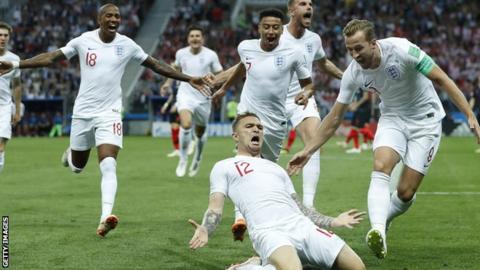 The project was originally geared at winning the 2022 World Cup, a 10-year plan of sorts given that England DNA was launched in 2012. We’re effectively halfway through the cycle and there have been undoubted improvements in the fortunes of English football.

Most notably, Gareth Southgate led England on an unexpected run to the World Cup semi finals in Russia. But much of the hard work has been going on below senior level. England won World Cups at Under 20 and Under 17 level and a European Championship at Under 19s whilst the number of young English players starting regularly in the Premier League has exploded in the current 2019-20 season in particular.

The players who delivered those successes will be peaking just in time for 2022 in Qatar. That’s when we’ll fine out if the England Football DNA blueprint has delivered. Right now, the signs are promising.

Getting certified to coach football for kids

Where to get football coaching resources